First day at the Lab

Last week we formalized things with Lasse Shelde, Manager at Bicycle Innovation Lab. From now on we'll be working on the project every Tuesday.

So, today was our first day at the Lab.
We spent the morning scrutinizing the 3D-model. Conclusion was that the overall frame seems solid and ready for a full scale test. The upper part of the frame, including the seat-post and the steering would probably work with a bit of adjustment, but we don't think it looks quite right yet.

Then there's the front hub. We have a basic concept which seems good. The details of how to actually build it are still pretty foggy, but we're optimistic.

As explained earlier we owe a lot to the 1921 Ner-a-car when it comes to the hub.

After poking at the model for a while, we got on our bikes and headed for the Lab, paying a visit to N55 on the way. One of the space frame bikes was parked outside. After having worked on the 3D-model for a while, it was nice and reassuring getting hands on with a similar bike.
The N55 workshop is always an interesting place to visit. These day, they are working on some pretty cool construction methods. We got some tips on where to buy materials, and continued to the Lab.

At the Lab we had a meeting with Lasse and did a bit of planning. Our plan for next week is basically to go shopping, so we can start building before christmas.
Posted by Hammershøj at Tuesday, November 29, 2011 2 comments: Links to this post

What we're doing is building D.I.Y. cargo bikes with hopefully no welding needed. This is based on the N55 XYZ SPACEFRAME VEHICLES building system - www.n55.dk. We've got several designs on the drawing board, but the first to be built will be the HubJohn. It's a two-wheel cargo bike with a bolt-together aluminum profile frame and center hub steering. Here's what we've got so far:


Credit where it's due
Here's our inspiration:

N55 made the original aluminum XYZ SPACEFRAME VEHICLES and made their drawings open source. We've chosen to use this construction method because it's easy, and no welding is needed. We don't know how to weld yet, and we figure that lots of other people who might want a cargo bike don't either. Plus it provides the possibility to make instant changes and modifications. Other than that it's cheap, light and looks cool.


Bike type: The Long John and the Bullitt

There's a long history of two-wheel cargo bikes in Denmark. Traditionally they were for some reason called John. The main types were the Short John and the Long John.

The Long John formula has recently been updated by the guys at Larry vs. Harry in the form of the Bullitt. It is an absolutely amazing bike, but comes at a price. The cheapest version costs $2.500,- delivery not included.

You might consider the frame design of a two-wheeled cargo bike a simple question of carrying a load between two points, just like a simple beam. The two supporting points are the front and rear hubs. In that respect the existing bikes are not structurally optimal. This is because the frame has to reach up above the front wheel at a pretty steep angle in order to grab the front fork.

Structurally we'd rather avoid sending the loads at play in the structure up through these angles, as they are awkwardly steep and require very strong joints. It is not ideal.

We'd like to just connect directly from the front to the rear hub. This could strengthen the structure, save weight and lower the center of gravity of the bike - making it more comfortable to ride and steer.

The thing is, you wouldn't be able to turn the front wheel, which would be a problem. The straight forward solution is to use the front fork, and end up with the situation shown above. There is however an alternative in the form of Center Hub Steering.

Apparently it hasn't been done on a bike before. Maybe it's been deemed too complicated, or maybe the standard front fork has always been chosen out of old habit. Whatever the reason, we'll give Hub Steering a go and see if we can make it simple enough to be viable. It'd be cool if we can pull it off.

Apart from the practical reasons, we're also doing it this way because we think it looks nice.

We're not exactly breaking new ground with this mechanism. It's been done successfully before as early as 1921 on the Ner-A-Car. Below is the 1925 model.

The following video gives a pretty good idea of how the steering works. The delight of the Dutch owner helps make it a good view:


You might say that we're being in-consequent by choosing Hub Steering, as it will probably make it more difficult to build the bike. You would of cause be right, but for us this is where much of the fun comes from, and if we succeed we might actually bring something new and useful to the world of cargo bikes.
If not, we already have designs for a regular front fork-version, which we plan to build as well.


The DIY spirit: Copenhagen Suborbitals
A lot of our inspiration for starting the project comes from Copenhagen Suborbitals. We don't know much about practical bike building, but we figure that if those guys can build a man-carrying space rocket using plate steel, pipes from the local hardware store and a hairdryer, we should be able to build a cargo bike.

Posted by Hammershøj at Tuesday, November 22, 2011 No comments: Links to this post

We're doing this for several reasons:

- to have fun
- to contribute to the DIY spirit
- to learn how to build stuff
- to make cargo bikes less expensive (we want some ourselves)
- to spread cargo bikes around world. Bike mobility and transport is the future, especially in urban centers
- to share our experience
- to hopefully inspire others
Posted by Hammershøj at Tuesday, November 22, 2011 No comments: Links to this post

We're building the bike at the Bicycle Innovation Lab. The Lab will also cover some of our expenses for materials and lend us their expertise. Thanks a lot to Lasse and the other Lab rats:)

The Bicycle Innovation Lab is a brand new project and we're among the first to make use of their facilities. Check out their wide variety of activities, including exhibitions, lectures, debates, workshops, film nights and bicycle library.
Posted by Hammershøj at Tuesday, November 22, 2011 No comments: Links to this post 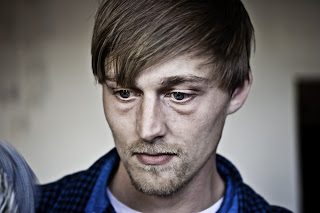 I'm a master student in Urban Design derived from studies in landscape architecture and city planning as an undergrad. I have a special interest in the mix of design and ecology that affects the public realm as well as peoples mindset. The DIY and Open Source spirit inspires me, and I hope to do the same and contribute with this project. Furthermore I, as an avid biker, can attest, cycling isn't just a form of transportation.

I just spent a half year in San Francisco as an apprentice at Rebar Art & Design Studio, working on a wide range of different project from exhibitions to reachable and highly visionary bike infrastructure with Gary Fisher. Currently I'm working at the Danish City Plan Laboratory (Dansk Byplan Laboratorium) as a part time student employee lay-outing their news magazine.
Some urbanism studies from the university - here.
A San Francisco blog - Urban Interim.
Flickr page - here.

I'm an architecture school dropout, with a keen interest in all things involving bicycles, especially physical and social infrastructure in city planning and urban design. I plan to apply for a Master in Sustainable Urban Design at Lund University.

I once worked as an intern at Gehl Architects, but now I divide my time between the Danish Architecture Center where I work as a guide, and the Danish Cyclist's Federation. At the Federation I work as an OpenStreetMap Community Manager, working to improve the map used in our route planner Cyclistic.dk.
I also occasionally blog at Copenhagenize.com and CopenhagenCycleChic.com.
Posted by Hammershøj at Tuesday, November 22, 2011 No comments: Links to this post